Your upgrades and gear ship safely with OWC. Learn more. »

Your upgrades and gear ship safely with OWC.
Learn more. »

We're sorry, but this item is no longer for sale. However, there may be more Expansion Cards items available.

In addition, Disk Utility can also be used to verify the SMART status of hard disks connected to the SeriTek/e6G. The FirmTek SeriTek/e6G is the first 2-port eSATA 6G controller that supports both port multiplication and Macintosh 3rd party SMART applications. SMART application support is a very useful feature for monitoring the condition of hard disks connected to the SeriTek/e6G.
Performance
The SeriTek/e6G features an energy efficient, two channel, SATA 6Gb/s compliant, hot swap, native eSATA interface with PCI-Express 2.0, one-lane bandwidth. The controller is compliant with the Serial ATA Revision 3.0 specification which supports SATA 6.0 Gb/s, 3.0 Gb/s and 1.5 Gb/s hard disks. SeriTek/e6G performance is optimized when installed in a PCIe 2.0 slot. The SeriTek/e6G is also backward compatible with PCIe 1.0 slots. For maximum performance, FirmTek recommends installing the SeriTek/e6G in a PCIe 2.0 slot when possible. The 2009 Mac Pro (MacPro4,1) offers PCIe 2.0 in all PCIe expansion slots. The 2008 Mac Pro (MacPro3,1) offers PCIe 2.0 in slot 2, while slots 3 and 4 provide PCIe 1.0 bandwidth. The SeriTek/e6G is PCI-Express Base 2.0 specification compliant which allows it to support PCI-e communication speeds of up to 5.0 Gbps when installed in a PCI-Express 2.0 compatible slot.
Port Multiplier
The FirmTek SeriTek/e6G supports FIS-based port multiplier aware hardware which allows up to ten hard disks to be connected to the controller when two 5-bay SeriTek/5PM enclosures are available. A port multiplier configuration can provide massive storage volumes for audio/video editing, multimedia libraries or backing up data. The SeriTek/e6G optimizes performance for up to 5 hard disks per data port by utilizing the advanced bandwidth characteristics of the PCI-Express architecture. Port multiplication also delivers significantly less cable clutter. A single eSATA data cable can attach up to five hard disks to the computer. The SeriTek/e6G can dramatically increase on-hand data storage capabilities. With up to 10 hard disks connected simultaneously, accessible storage limits can be effectively eliminated for all but the most demanding applications. 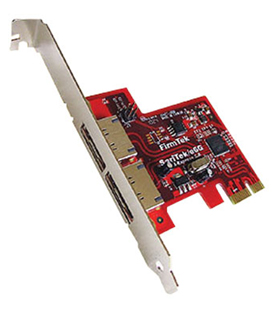 See specifications below for system and/or OS compatibility information

Notes: Manufacturer provided specifications for Firmtek p/n SATAE6G
This product is compatible with... Learn how to find your Mac's model ID