We're sorry, but this item is no longer for sale. However, there may be more Thunderbolt » Thunderbolt Expansion Chassis » Thunderbolt 3 to PCIe » Desktop PCIe Chassis » PCIe Single Slot Chassis items available.

This was an Open Box product listing. For more great deals on Open Box, Refurbished and Used items, keep an eye on our Garage Sale page. Or join our email list and be the first to know when new items become available!

Thunderbolt 3 / Mac / Windows
The eGPU chassis built to empower
Add the power of a high-performance GPU to your Mac and PC via Thunderbolt 3. Whether you're bringing a creative vision to life, crunching research data, playing the latest hardware-punishing game, or connecting additional displays — the OWC Mercury Helios FX is built to empower everything you do.
The Power to Do More
Achieve smoother frame rates, encode faster, edit in greater resolutions, add displays, utilize VR and AR, elevate gaming performance, or take advantage of the complex data crunching GPUs excel at. You'll have plenty of options with support for most Thunderbolt-compatible AMD Radeon™ and NVIDIA® GeForce®, TITAN, and Quadro® GPUs.
Transformative Notebook Performance
Change the way you think of notebooks. Utilize the greater portability and flexibility of lighter laptops while taking advantage of easy-to-upgrade desktop-class GPUs. With an OWC Mercury Helios FX in your arsenal, performance is plug-and-play, and upgrades are easy.
Multi-Platform Flexibility
The OWC Mercury Helios FX provides an exhilarating performance boost to both Macs and Windows PCs featuring a Thunderbolt 3 interface. Whether in a single-platform environment or a mixed-platform environment, the OWC Mercury Helios FX can easily be moved between computers to enhance workflows wherever it is needed most. 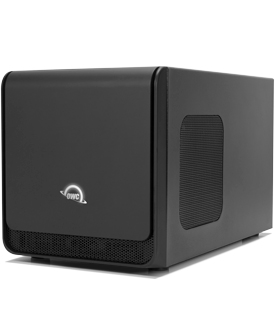 1. For non-GPU PCIe cards, macOS 10.12.6 or later is required.
2. For easy setup OWC recommends cards that are 28 cm in length or less. Longer cards may require extra steps to remove the power supply, or may not fit at all depending on shroud design. Manufacturer provided specifications for Other World Computing p/n HELIOSFX UPC#: 812437024678 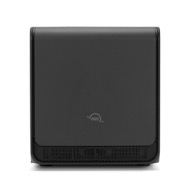 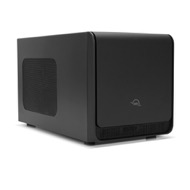 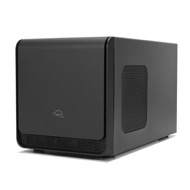 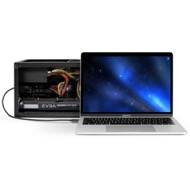 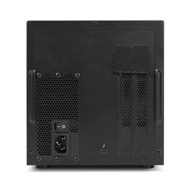 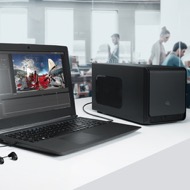 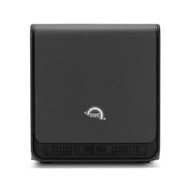 This product is compatible with... Learn how to find your Mac's model ID

The 13" Macbook more than tripled export performance (from 22 to 76 images per minute) when the eGPU was used (second and third rows in the chart). The nice thing is the ability to swap out the RX 580 for a better card in the future.

Also, it's very quiet, surprisingly so. At one point in the test I got a lot of fan noise but it was from the Macbook itself rather than the eGPU.