We're sorry, but this item is no longer for sale. However, there may be more Video & Display » Video Cards » PCI Express for PC and eGPUs items available. 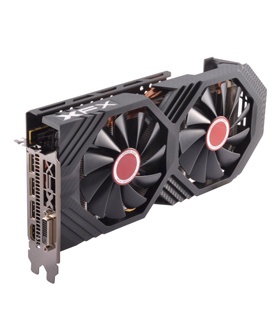 Highlights
Power when you need it and quiet when you don't
XFX fans are equipped to run at the highest possible performance, while their Zero DB Fan System will also keep your fans running at efficient RPM in order to minimize annoying fan noise by lowering RPM all the way down to Zero RPM. When the heat is on during intense gaming, the fans will speed up as needed.
Exceptionally comfortable VR
Experience beautifully rich and immersive VR experiences with advanced comfort and effortless compatibility. Avoid nausea and motion sickness, made possible by the AMD LiquidVR™ initiative, featuring ground breaking Asynchronous Shaders. The Radeon™ RX 500 graphics cards, combined with AMD LiquidVR™ technology already in use by leading head-mounted display (HMD) vendors, provides an exceptional platform for a fully immersive and comfortable VR experience.
AMD FreeSync™ 2 Technology
No stuttering. No tearing. Just gaming. Gaming shouldn't be a choice between choppy gameplay and high performance. With XFX Radeon™ RX GTS Series graphics and FreeSync technology, it doesn't have to be. Transform the most demanding games into a liquid-smooth, artifact-free, 4K cinematic experience with the highest performance at virtually any frame rate. FreeSync works at the speed of your game for incredible responsiveness and uncompromising smoothness. Every gamer deserves perfectly smooth gameplay and peak performance. Unlike the competing technology, you don't have to choose with FreeSync technology.
Multidisplay technology for gaming, productivity and entertainment
Expand your territory and customize your field of vision. Connect up to six displays on a single GPU for dynamic, panoramic multi-screen gaming. You'll get an expansive experience that's truly out of sight. (additional displays may require the use of MST hub).
Expand the range of colors
Premium HDR - High Dynamic Range (HDR) is a state-of-the-art technology for gamers and cinephiles that care deeply about the display quality of their TV or monitor. Modeled after the acuity of human vision, HDR vastly expands the range of colors and contrast ratios that can be shown by compatible displays. HDRready games and movies played on an HDR display appear strikingly sharp, colorful, and vivid, with enhanced contrast and sophisticated nuance compared to even the most stunning SDR content.

The Radeon™ RX 500 Series graphics card's brand new display engine and HDR ready capabilities equip you for the new wave of HDR displays, content and the future of gaming.
Ready for the latest displays
Radeon™ GPUs with the Polaris architecture support HDMI® 2.0b and DisplayPort™ 1.3 for compatibility with a new generation of monitors that would make any gamer excited.
Great performance, even on the go
Should a PC gamer on the go buy a gaming notebook that's tough to carry, or a thin notebook that's tough to game on? AMD XConnect™ unlocks the best of both worlds on systems designed for Thunderbolt™ 3 eGFX enclosures. Finally you can use a desktop graphics card on a notebook. 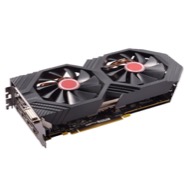 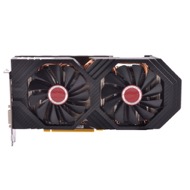 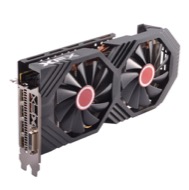 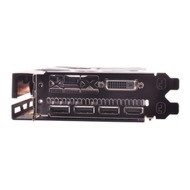 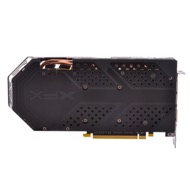 This product is compatible with... Learn how to find your Mac's model ID