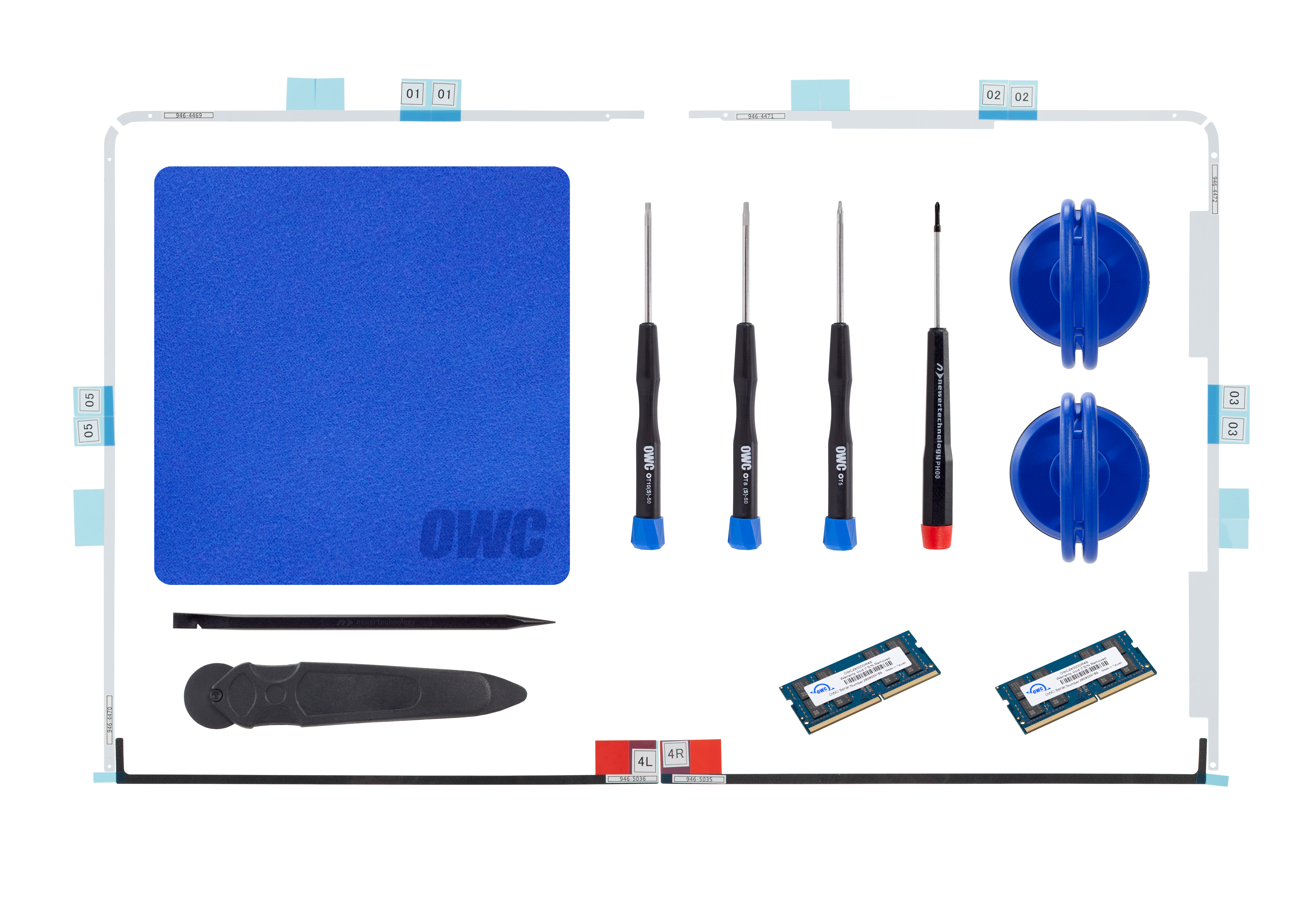 Product Specs:
Professional Installation Highly Recommended
While this upgrade kit itself should not void your warranty, the installation process is very complex and thus it is recommended to be performed by a trained professional.

Save money by trading in your original chips! View available memory rebates.
From the purchase date of qualifying memory from OWC, you have 60 days to trade-in your old memory for a cash rebate!
Just fill out OWC's online rebate form or contact OWC Customer Service after you receive and install your new memory.
- Please allow up to 14 Days from the time we receive your memory for testing and rebate processing.
- The OWC Rebate is for up to the same number of memory modules purchased and must be in working order.
This memory kit and included memory is for Apple iMac 4K 2017 (21.5") Models only. Memory provided in this kit is special config for 21.5" ONLY and is NOT compatible with Apple iMac 27" Models. Included memory also compatible with PC Laptops which use DDR4 2133 or 2400 modules.


NOTE: This kit contains consumable and/or one time use components and therefore is not covered by any warranty. If you have any concerns about your ability to perform the upgrade, you can return the unopened kit for a refund.
Please note: This memory kit and included memory is for Apple iMac 4K 2017 (21.5") Models only. Memory provided in this kit is special config for 21.5" ONLY and is NOT compatible with Apple iMac 27" Models. Included memory also compatible with PC Laptops which use DDR4 2133 or 2400 modules.

This OWC Memory is compatible with... Learn how to find your Mac's model ID or PC specs

With the parts finally in my hands and armed with the OWC video, I set about upgrading the iMac. I must mention that the quality of the video is very good. I had it running on my laptop while I worked on the iMac. I paused the video every now and then while I worked. Many people fear the process of opening an iMac. That really, was the least of my worries. It is not such a delicate process once you understand how it is done. The major challenge for me, was disconnecting the various cable contacts within the computer. Broadly speaking, there are three types of contacts inside the iMac. Ones that are just slipped in and out; ones with a latch and a minuscule one with a tiny latch. The usual method is to tug at the cable to pull them out. Not ever having done the sort of work, I did wonder how much pressure was too much pressure. Some of the cables like the AC Inlet Cable, seem to be able to take quite a bit of pressure. Some appear to be so delicate that I was hesitant to even touch them. The cables leading from the Power Supply to the back of the Logic Board was a major challenge (because the instructions were incorrect). The OWC video instruction mentions. “… by squeezing the small tab and sliding the connector out of the socket.” I actually had to take out the entire Logic Board along with the Power Supply module, to look under the Logic Board. It appeared that one needed to pull the tab and then slide the connector out. In any case there is so little space to do that, by reaching under the Logic Board. There must be another way to do it. The rest of it was only careful application and a singular determination to complete the project successfully.

Closing the iMac was every bit as tricky as the opening of the machine was. I must mention here that the original Apple adhesive strips Appeared to be of better quality than the ones that came with the OWC Kit. There is also a little bit of a confusion as to positioning of strips 4L and 4R and why their face-up colour should be different. Do also note that positioning the screen at a slant (so that one can make the final two cable connections), before closing the iMac and aligning it flush with the base near the Apple Logo is a bit of a challenge. That final process needs a fair amount of care. The assistance of a second person to hold the screen up while you make the final reconnections, will be helpful.

Migrating the applications and data on the old Drive to the new SSD is a piece of cake, thanks to Apple’s Migration Assistant. Here, I must commend the ease with which the whole process can be handled. The time involved depends on the speed of one’s Internet connection and the amount of data on the old Drive. It took me only 30 minutes to install the Operating System. It took me about 2 hours and 45 minutes to migrate my data.

Read the whole story on my Blog: https://www.coromandel.co/en/technology-the-saga-of-upgrading-an-imac/