We're sorry, but this item is no longer for sale. However, there may be more Internal Hard Drives and SSDs items available.

Unlike the factory pre-configured models with no other SSD choices offered, the Aura SSD line allows you toy buy the MacBook Air you want today and enjoy the flexibility of upgrading for higher performance when you need it.
Better by Design
"Mean Time To Failure" - We all know that nothing lasts forever. But that doesn't mean you shouldn't get the most out of your investment. OWC SSD with DuraWrite™ Technology, optimizes writes to the flash memory over conventional controllers increasing the overall endurance and reliability of the complete SSD. Highly intelligent block management and wear leveling also extends the overall endurance. With this technology, even MLC-based SSDs can operate for years in demanding use applications without daily write restrictions. This adds up to a MTTF that is higher than most enterprise class hard drives and SSDs on the market today.

Additionally, as there are no volatile memory elements in this storage device, the need for cache is completely negated. The drive is just that fast from the get-go! 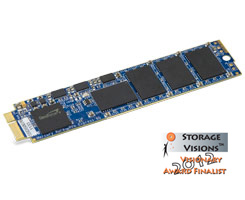 Note: The Aura 6G SSD achieves 6G speeds with compatible 2011 MacBooks and 3G speeds with 2010 MacBooks.
The Aura™ is compatible with... Learn how to find your Mac's model ID

NOTE: unless you own or have access to a Pentalobe compatible driver and a Torx T5 screwdriver, or bought a Aura/Envoy bundle which includes these tools, you will need to purchase the MacBook Air 2010-2012 SSD Installation Kit. 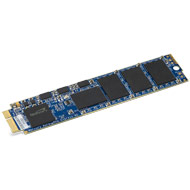 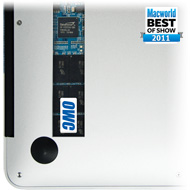 How to Install the Aura Pro in MacBook Air 2011

Because OS X Lion is preinstalled on the removable Apple factory flash drive module, you cannot simply remove that drive and replace it with an OWC Aura Pro SSD without some initial preparation.

There are two methods you can select to prepare using an OWC Aura Pro SSD in your Mid 2011 MacBook Air.

NOTE: If moving an OWC Aura Pro SSD used in a 2010 MacBook Air, using this method will completely erase the drive's data. Make SURE you have a Time Machine® backup or clone of the OWC Aura Pro SSD on an external drive.

"The best upgrade that you can get for the MacBook Air." - Jason O'Grady, ZDNet

"...the OWC Mercury Aura Express 6G is a must buy ... scorching performance ... it's easy to give this product a massive two-thumbs up." - Brian Beeler, StorageReview.com - Aura Pro Express 6G 240GB

"...the Envoy is absolutely essential...exactly what I was looking for in an SSD enclosure..." - Jason O'Grady, ZDNet - Mercury Aura Envoy

"... a simple, painless process ... well worth the much smaller investment to fix the MacBook Air I have rather than spending the money for a new laptop ... Now I have a "new"
MacBook Air ..." - Tony Bradley, Forbes — Aura Pro 6G for MBA 2011

"How would you like to have Two Terabytes (2TB) of flash storage inside your Mac Pro? Meet the Aura SSD." — Rob-ART-morgan, Bare Feats

&quotThe hardware install part of the upgrade took me less than 5 minutes ... they have really thought of everything ... wow is all (I) can say ... 5 out of 5 stars on the TechTable." — Dave Helmly, DAV's Tech Table

"The safest option ... is to buy the appropriate drive from macsales.com, since they're specifically compatible." — Christoher Phin, Lifehacker UK

"It is quite evident that the Envoy Pro enclosure ... enjoys a minimalist design, good solidity and strength and also ensures excellent performance." — Liborio Fedele

"... I wanted to upgrade the hard drive and this is another area where OWC is second to none. The whole Aura SSD installation took me exactly 6 minutes." — Gregg Ellman, Idaho Statesman

Hopefully the product last as I had come across reviews that mentioned about the SSD lasting them only like a year or 2. Fingers crossed.