Thanks for reaching out!
Rocket Yard > Tech Tips > RTM: May Not Always Be Right

RTM: May Not Always Be Right

Apple may seem perfect to all of us, but every once in a while, a little gremlin creeps into your life.

We found a possible little bug in the new Mac Pro manual on installing RAM. If you have 2 chips the manual says to put them in slots 1 and 2. Apple’s Memory Slot Utility, however, contradicts that and says slots 1 and 5 are correct. The manual appears to your right. 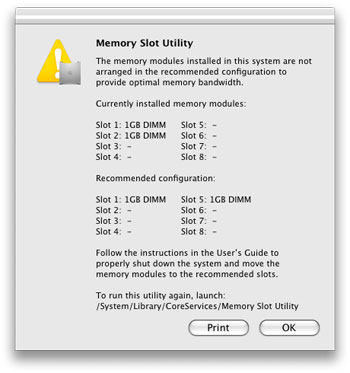 How to Pin a Note (and More) in macOS Big Sur

Got Game? Play Classic Games On Your Mac Without an Emulator

the authorOWC Newsfeed
The OWC Newsfeed provides the latest OWC, MacSales.com, Rocket Yard, and industry news, information, and announcements for your reading pleasure and shareability!
All posts byOWC Newsfeed
Be Sociable, Share This Post!
OWC NewsfeedMarch 10, 2009

How to Make Sound Bridges in Premiere Pro